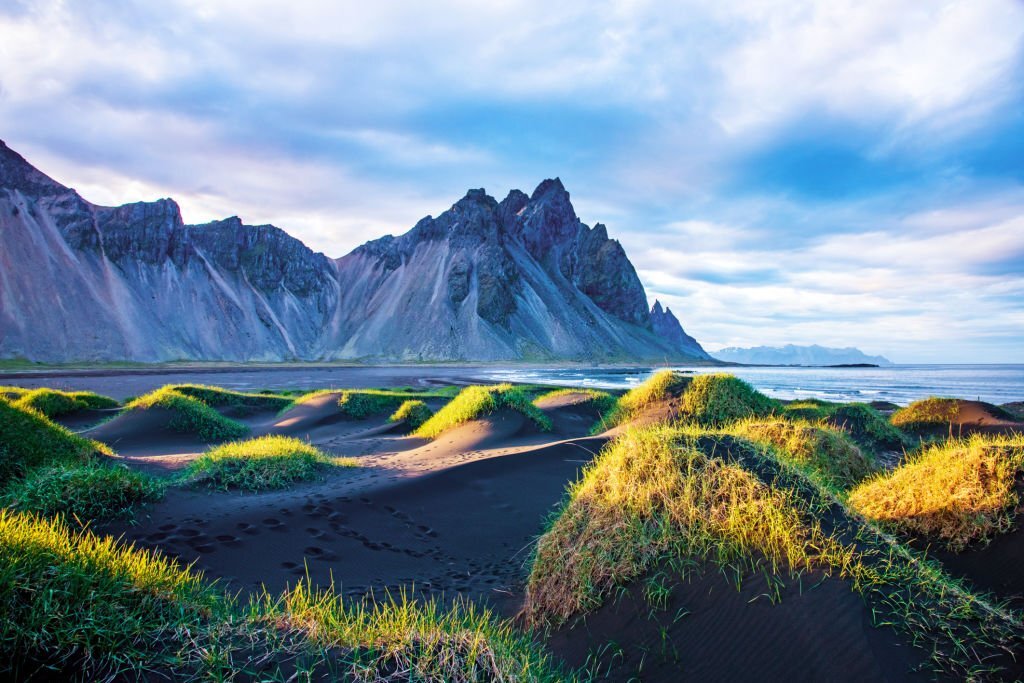 Welcome to the land of fire and ice. Iceland is one world’s leading and prettiest travel destinations, not only for thrill-seeking travelers but also for nature lovers who are looking for something unique and rare.

Iceland is a Nordic island country in the North Atlantic Ocean. It is located in a volcanically and geologically active area. Its total land area is close to 103,000 square kilometers and it is the 106th large country and 18th largest island in the world. This total land area is covered by lava fields, mountains, glaciers, and sand fields. Iceland is the most sparsely populated country in Europe.

So come join us this is Scenic Hunter’s genuinely magical journey to visit the most beautiful destinations in Iceland.

The Vestrahorn is one of the few gabbro rock mountains in Iceland. It is located on the Stokksnes Peninsula in Iceland’s far southeast on the famous ring road. The formation of Vestrahorn dated back to 8 to 11 million years ago. Its name was because of the horn’s appearance. It is also known as batman mountain due to its three notable peaks resembling the famous batman logo. The mountain stands 454 meters high above the sky. The mountain peaks are surrounded by a striking black tidal lagoon which offers a magnificent reflection of the mountains and became one of the photographer’s paradises in Iceland. Great wildlife, stunning hiking trails, Viking village, and picture-perfect natural surroundings of Vestrahorn attract travelers from all around the world.

Seljalandsfoss waterfall is a powerful waterfall that cascades into a pretty meadow. The waterfall is located along the southern coast of Iceland. It is fed by melting water from the famed glacial-capped volcano, which is known as the Eyjafjallajokull volcano. The stunning waterfall cascades over steep cliffs and is surrounded by impressive natural landscapes. It is one of the most famous and most visited falls in Iceland. The wide cavern, rocks, and path that lie behind the waterfalls are the most notable features in the Seljalandsfoss.

The Vik is the southernmost seafront village in Iceland. It is a remote village located on the main ring road. The peaceful and scenic village is famous for its captivating little church.  The village is boarded by the famous Reynisfjara beach to the south. Iceland boasts a number of black beaches awash with silky dark sand. Among those Reynisfjara is a world-famous black-sand beach found on the South Coast of Iceland. It is easily accessible from Vik so you can enjoy the breathtaking black sand beach while exploring this magical tiny village. Other than that Vik is home to various species of birds and marine life. So you will probably meet adorable puffins, sunbathing seals on the black sand beach, or dolphins and whales visiting the shore.

Hverfjall is a tuff ring or tephra cone volcano located in northern Iceland to the east of Myvatn. This small volcano is one of the most beautiful tourist spots in Iceland. It has an impressive crater approximately one kilometer in diameter. It lies just off the famous ring road. The Hverfjall is not too hard to hike and not time-consuming as well. The place is so stunning especially when the soft white snow covered its crater.

Kirkjufell is a uniquely shaped mountain peak found on the north shore of the Snaefellsness peninsula in Iceland. Due to its perfect location and dramatic outlook, it became the most photographed mountain in Iceland. The mountain is also known as the Church Mountain due to its shape. The beautiful waterfall that cascades near the mountain doubles the beauty of the mountain and provides excellent angles for photographs. Kirkjufell changes its appearance with seasonal changes. However, the most interesting fact is that the mountain is adorable and picture-perfect in any season of the year.

Skogafoss is one of the largest waterfalls in Iceland. It lies a few kilometers away from Iceland’s south shores in Skogar village along the southern ring road. Skogafoss is a famous summer resort center in the country. The unusual scenic beauty of the area, snow-capped with two towering glaciers doubles the beauty of the area. If the weather is favorable when you visit you can see single or double vivid rainbows in front of the waterfalls.

Landmannalougar is a stunning and uniquely beautiful rock formation in heart of Iceland’s southern highlands. The colors shades of pink, red, green, pink, blue, and golden yellow make it otherworldly. Nearby lava fields, geothermal hot springs, and dozens of stunning hiking trails attract adventurous travelers throughout the summer. The unique and astonishing geological setting of Landmannalougar is the result of thousands of years of volcanic activities. The mountains consist of Rhyolite made of quartz and silica. Other than that minerals including sulfur and iron add pretty color shades to the mountains.

Myvatn is a shallow lake with many small islands located in an active volcanic area in the North of Iceland. It is the fourth largest lake in Iceland. Lake Myvatn is one of the most astonishing natural attractions in the country due to its incredibly unique geology, lake, birdlife, and serene landscapes. Myvatn nature baths are another highlight of the area. You can enjoy panoramic views of the surrounding area while soaking in the milky blue thermal waters of the outdoor pools.

Vatnajokull National Park is one of Iceland’s three national parks. The national park covers 14,141 square kilometers, which is almost 14% of Iceland. It is considered the second largest national park in Europe. The National Park is home to the Vatnajokull Glacier which is the largest glacier mass in Europe. Rivers, awe-inspiring landscapes, glaciers, mountains, volcanoes, geothermal areas, and ice caves collide together to make one of the most mesmerizing natural environments. Jokulsarlon is one of the most notable spots in the park. It is a large glacial lake in the southern section of Vatnajokull National Park. The iceberg-scattered lake was formed by the melting water of the Breidamerkurjokull glacier.

Golden Circle is a famous tourist route in Southern Iceland. It covers approximately 300 kilometers and stretches from Reykjavik into Iceland’s Southern uplands and back to Reykjavik. It runs through many of Iceland’s natural wonders including waterfalls, spas, geothermal areas, and volcano creators.

Blue Lagoon is located in an 800 years old lava field sprawling near Grindavik in the heart of the Reykjanes peninsula in southwestern Iceland. The milky blue waters of the blue lagoon are striking with the stunning black lava fields and convert into a mystical otherworldly place.

The stunning blue shade of the water is due to the high silica content and is also rich in algae and salt. It is a geothermal spar and is well known for its healing and soothing power. The average temperature of the lagoon is about 37 to 39 Celsius which is perfect for bathing.

For Those Who Prefer To Hike Alone, Here Are 05 Important...