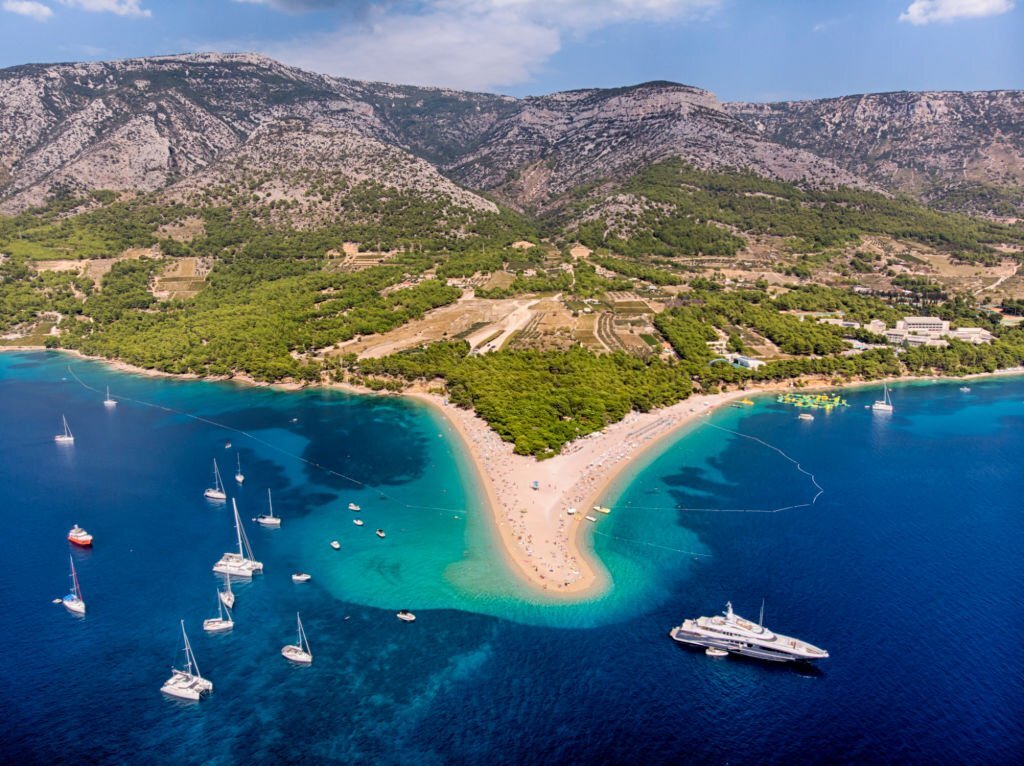 The crescent-shaped country, of Croatia, is located in southeast Europe. Even though it is small in size Croatia is a geographically diverse country. Croatia is bordered by Serbia to the east, Hungary to the north, and Montenegro to the south. It shares a long border with Herzegovina and Bosnia within the hollow of the crescent.

If you are hoping to explore breathtaking Mediterranean days, balmy days on stunning sandy beaches, extraordinary beach adventure, and gorgeous natural landscapes surrounded by rich fauna and flora and proud Croatian cities, Croatia ticks all the boxes on your checklist.

Limestone karst landscapes of Croatia are a wonderland of picturesque lakes, rivers, river canyons, waterfalls, caverns, and craggy peaks, and it is surrounded by dazzling white pebbly beaches and the sparkling Mediterranean Sea.

There are a lot of cosy places are available to choose from. So here is a scenic hunter’s simple guide to picking the best places to visit in this beautiful country.

Krka National Park is one of the Croatian National Park which lies along the Krka River. The park is located in central Dalmatia near the historic city Šibenik. Its magnificent waterfalls are the top attractions of the park. Among them, Skradinski Buk falls are one of the most famous sights in Krka National Park and the whole of Croatia. The park also boasts 6 more waterfalls, historical sites and countless serene landscapes.

The park is home to over 200 bird species including egrets and herons. Therefore the park is a famous destination for bird watchers. A boat trip through the park is the best way to see the breathtaking view of the park.

Omiš is a stunning holiday destination in Croatia, which lies between Split and Makarska. A small town, Omiš is at the mouth of the Cetina River, at the end of a gorgeous canyon, and its location is where the mesmerising Cetina River meets the Adriatic Sea.
Omiš is considered the active traveller’s paradise. So you can experience unforgettable adventurous fun with rafting, free climbing, cycling, windsurfing, canyon safari and many more beach sports.

Starigrad fortress, Omiš Cetina canyon, fortress Mirabella, St. Michael’s square, the Parish church of St. Michael, and the Franciscan Monastery are some of the most highlighted places in Omiš.

Mljet is the easternmost and southernmost island of the Adriatic islands, Croatia. Mljet is considered the greenest island in Croatia with its crystal clear beaches, Mediterranean vegetation, and rich marine life. The eastern section of the Mljes features brilliant beaches, scenic little bays, and a couple of perfect eateries. The entire western side of the Mljet is home to a national park. The national park boast lakes sleep little port called Pomena, and an island monastery. The combination of both landscape and seascapes make it the most seductive island in the Adriatic.

It is indeed one of the most beautiful islands in Croatia. Pristine Mljet is well known for densely forested Mediterranean landscapes, two salted lakes, olives, wine, and goat’s cheese.

Korĉula is a scenic Croatian island that stretches into the Adriatic Sea. It is the sixth largest island in Croatia. Due to its densely forested landscapes, ancient Greeks called it the Black island. The island features medieval churches, houses, palaces, squares, small towns, and villages. Therefore it is also known as the little Dubrovnik.

Korĉula is a perfect summer destination with its lovely beaches, warm sunshine, and gorgeous sea and enchants the travellers with its elegant houses, glorious Adriatic sunset, and narrow walkways.

Zadar is located on the northern Dalmatian coast on the Adriatic Sea. The 3000 years old Zadar, is the living museum of the Europe of millennia ago.

Travellers can soak up history when strolling through the Roman Forum, the church of St Donatus, renaissance era land gate, Venetian era bell tower, Cathedral of St Anastasia, and Museum of Ancient Glass while enjoying delicious foods from a street-side café.

The seafront of the Zadar is magnificent during the sunset or sunrise of the day. The scenic city is tempting its visitors with an array of causeway trip options including island Premuda, Dugi Otok, and the island of Silba. Zadar’s people have their centuries-old method to make olive oils. So you can buy a world-class organic olive oil bottle.

Rovinj is an old-world charming Croatian city located on the North Adriatic Sea. Its brightly painted buildings, fishing boats lined seafront, bustling streets, and the baroque church that stands on the hilltop make it one of the most stunning coastal towns in Croatia.

Due to its Roman culture and architecture, the city looks more Italian than Croatian. Rovinj old town, Golden cape, Lone bay, Monkodonja hill fort, St Catherine’s islands, Atlantic Titanic, St Euphemia’s church, and Grisia are some of the most special tourist attractions located in the nearby area.

Pula, a seafront Croatian city lies on the southern tip of the Istrian Peninsula. The city owns a centuries-long historical tradition of fishing, wine making, tourism, and shipbuilding. Pula is well known for its impressive mix of culture, and rich Roman ruins. The Arena, a 1st-century Roman amphitheatre is the top attraction of the city.

Zagreb is the capital as well as the largest city of Croatia, and lies on the northwestern side of the country, at the southern slope of the Medvednica Mountain, along the Sava River. Zagreb is the cultural, historical, economic, art, and academic hub of the country. The city has a unique combination of palaces, medieval towers, ancient cathedrals, open-air markets, and Romanesque architecture making it a perfect place to explore.

Cathedral of Zagreb, St Mark’s church, Bogovićeva Street, Jarun Lake, Dolac market, the stone gate of the Virgin Mary, Jelačić square, and Strossmayer walkway are located in Zagreb and are considered some of the best places to visit in the whole of Croatia.

Split is the second largest city in Croatia, located on a peninsula off the Dalmatian coast. The city is nicknamed the Mediterranean flower.

Diocletian’s Palace, Peristil square, Marjan Forest Park, snorkel in the famous blue lagoon, Saint Domnius cathedral, and bell tower, water rafting on the Cetina River, hiking and cycling the beautiful Marjan hill, sunbake on Brač Island, and Jupiter’s temple, are some of the prominent tourist activities in the Split.

Striking blue shades of the sea perfectly blend with the vibrant orange colours of the roofs.

The Croatian island Hvar is located off the Dalmatian coast, between the island of Vis, Brač, and Korĉula. Hvar is the most fashionable island among blissful Dalmatian islands and is home to some of the top-rated hotels and seafood restaurants.

A large part of the island is covered by fruit Orchards, lavender fields, and olive groves. Stunning natural bay, Pakleni island chain, Starigrad old village, Spanish fortress, Dubrovica beach, Vrboska fishing village, Malo Zarace beach, Tvrdalj castle, and Blue cave are some of the notable sites in Hvar and all of them are well worth a checking out.

Plitvice Lake National Park is the most visited attraction in Croatia. The park is located halfway between the capital of Zagreb and Zadar and it lies in the mountainous karst of the central part of Croatia at the border of Herzegovina and Bosnia.

The National Park features 16 emerald green lakes flowing through forested hills and connected by a succession of cascading waterfalls. The stunning lake system is the result of millennia of ongoing biochemical and geological processes. The scenic park is home to rare species of wildlife including lynx, eagle, European brown bear, and wolf.

The Plitvice Lake National Park is considered the oldest and largest national park in Croatia and was listed as a UNESCO world heritage site in 1979. You must visit this amazing natural setting at least a single time in your life.

Dubrovnik is one of the most glamorous tourist destinations in Croatia which incorporate spectacular towers, fortresses, churches, fountains, and canyons along the way. The city is nicknamed the pearl of the Adriatic and it became the only city-state in the Adriatic to rival Venice during the middle ages. The magnificent Dubrovnik is surrounded by famous medieval defensive walls.

Due to its historical significance, it was listed as a UNESCO world heritage site in 1979. The recorded history of the city dates back to the 7th century and achieved a high level of economic development during the 15th and 16th centuries.

scenichunter - June 28, 2022 0
Iceland boasts a number of black beaches awash with silky dark sand. Among those Reynisfjara is a world-famous black-sand beach found on the South Coast of...

Veronica & Archie is Just a Happy Couple in Russia