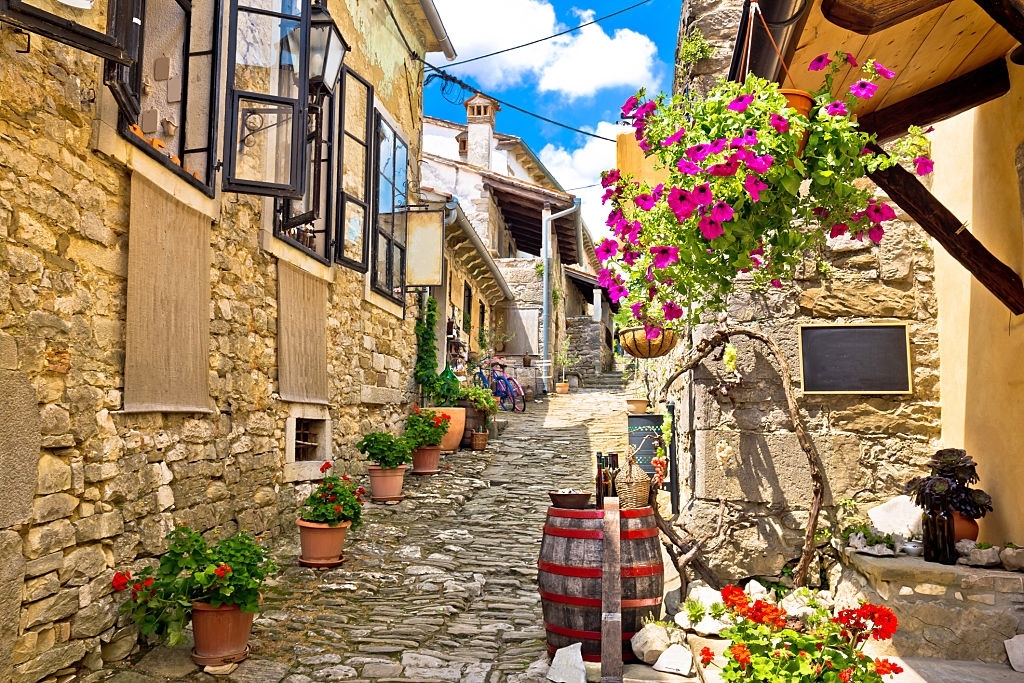 The town is known as Hum, located in the scenic small country of Croatia, bordering the Mediterranean Sea in southern Europe and Slovenia. Although Croatia is famous for their football team, it also famous for scenic beauty and smallest town in the world.

However, in the year 1802, Juraj Grazinic, a local saint who came here and established a church, and the town of Hum began to be inhabited from then on. The Hum is situated on a very attractive high hill. Although it is actually called a town, at first glance it looks like a fortress. This small plot of land is covered by a wall made entirely of large stones on one side and several very high buildings on the other side.

The city of Hum is located close to the city of Buzet in the Istrian region of Croatia. Walking from Roc the nearest human settlement to Hum is a favourite pastime of many tourists. The path from the traditional vineyards and lush greenery to Hum, truly kisses the most beautiful places of natural beauty.

This small town is considered by many to be a magnificent Roman nomenclature because the fort was built according to ancient Roman architecture.

Anyone can see the completely green mountain ranges kissing the distance sky, from any angle of the Hum. The world’s smallest town is shaped by the traditional Croatian’s farmlands and orchards, as well as small streams flowing through the lush forest.

Although it is a UNESCO World Heritage city, it doesn’t have the basic human needs of a major city. But due to the size of Croatia and the short distance between its cities, Hum people don’t have any problem fulfilling their basic needs.

The elevation of this town is about 349m. The smallest town in the world is inhabited by only 30 villagers and 20 apartment buildings. This beautiful village has several tourist shops, one restaurant, an ancient church a museum and the most famous brandy shop.

The people of Hum have a brandy recipe that is more than 2000 years old and the brandy that is made from it, is very popular over Europe. Inarguably, it is one reason Hum to be most popular in the world.

Anyone who comes to the store will have the opportunity to taste a small glass of brandy or wine, which reflects the hospitality of these beautiful people. The mayor is the head of the town, who elected on June 11 in every year.

The Hum consists of two main streets paved with small stones, and the houses in the ancient buildings on either side reflect a beautiful view. Beautiful flowers and plants can be seen in front of every house and house cats can be seen in every house in this small settlement. Antiquity, ancient Roman architecture, ancient Croatian culture, years-old traditional brandy, delicious pure wine, hospitable Croatian and Italian speaking Hum resident, the museum and old railway station attract a large number of tourists all year round.

So if anyone is thinking to visit, there is an opportunity to experience something new and the breathtaking beauty of the smallest town in the world. If you get a European visa, you can travel to Croatia, then to Buzet. From Buzet, you can take a tourist bus to the world’s smallest town.

scenichunter - July 25, 2022 0
Brúarfoss Waterfall is a glacial-fed stunning waterfall in the west of Iceland. It is well known for its striking bright blue colour. Brúarfoss means...

For Those Who Prefer To Hike Alone, Here Are 05 Important...