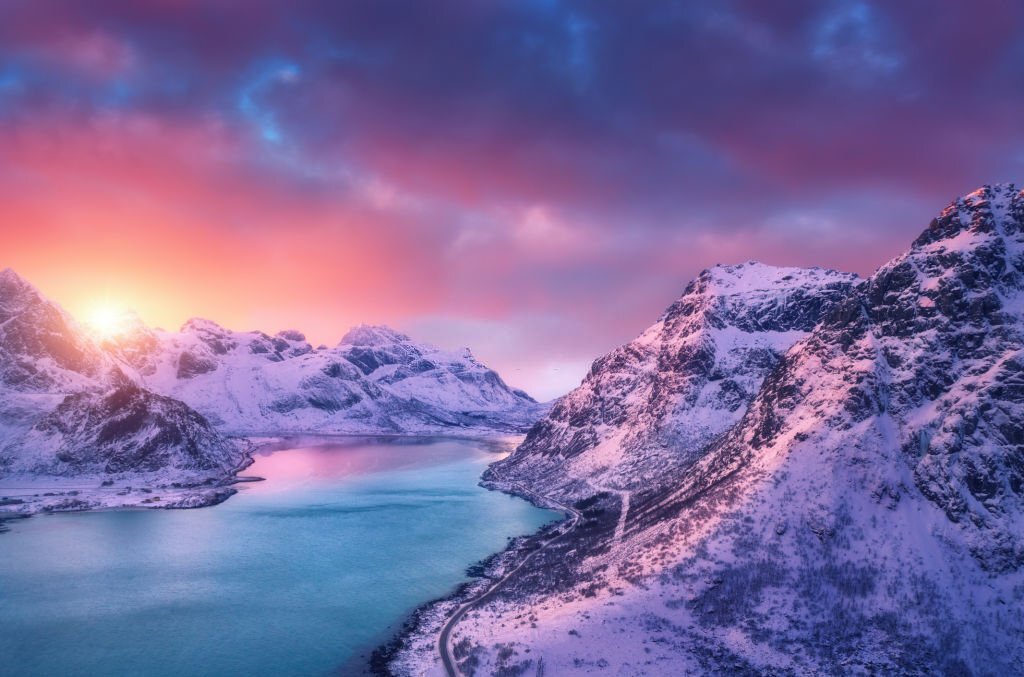 Today on Scenic Hunter we are ready to embark on a spectacular journey to the Nordic country in northern Europe, known as the “Land of the Midnight Sun”, and officially named the kingdom of Norway.

Norway is one of the most mesmerizing countries with its trendy cities, glittering fjords, northern lights, lush greeneries, midnight sun, massive glaciers, and Viking history. The unspoiled landscapes of Norway serve as a backdrop for some of the scenic & most charming villages in Europe.

Norway is on many travelers’ bucket lists because it is one of few places on earth to experience the unbearable contrasting color that moves across the Arctic sky. Between late September and late March, the Northern part of the country is dark from early afternoon to late morning. So, travelers have a great chance to view the northern lights while experiencing hiking, skiing, winter fishing, whale watching, or wildlife safari.

Norway is continuously ranked as one of the best countries to live in. So this is the time to explore the most delightful places to visit in this breathtakingly beautiful country.

Geirangerfjord is one of the scenic fjords in the Sunnmøre region in the west of Norway. The small scenic villages of Geiranger and Hellesylt are at the end of the fjord. It is one of the most visited spots in Norway as well as one of the most famous and photographed fjords in the whole world. The mesmerizing Geirangerfjord was listed as a UNESCO world heritage site, jointly with the Nærøyfjorden. It stretches over 15 kilometers along steep mountains and jagged peaks. This picturesque fjord boasts gigantic mountain cliffs, breathtaking waterways, and sparkling misty waterfalls. Seven sister waterfalls and the Suitor are two of the most notable waterfalls in Geirangerfjord. Numerous tours and cruises are available to explore the splendid beauty of the Scenic environment.

Lofoten is a traditional district in Norway that lies on the northwest coastline of Norway. It is considered to be one of the most significant elevated temperature anomalies in the world due to its high latitude. Impressive islands are scattered over the area and connected to the mainland by a series of bridges and tunnels. The archipelago is home to epic fjords, seductive beaches, sleepy little fishing villages, and awe-inspiring peaks. The islands look so dramatic and astonishing during both green and yellow summers and spark blue and white winters. A diverse array of wildlife is available for you to explore. It seems that every corner of the Lofoten islands offers spectacular views. So you can explore the scenic beauty while enjoying hiking trails, midnight sun, northern lights, charming fishing towns and villages, surfing, climbing, and delicious Norwegian cuisine.

Sognefjord is also known as Sognefjorden and is nicknamed the king of the Fjord. It is located in the Vestland country in Western Norway and is considered the largest and deepest fjord in Norway. This majestic fjord reaches 204 kilometers inland from the coastal village of Skjolden, and the fjord reaches a maximum depth of 1,308 meters below sea level, and the greatest depths are found in the central parts of the fjord near Høyanger. Its branches boast countless smaller inlets and fjords along the way. A boat is the best way to explore the splendid beauty of the fjord. Therefore it offers plenty of fjord cruises and sightseeing tours. This amazing area is home to sweeping valleys, dramatic cliff faces, picturesque pastures, sparkling waterfalls, and secluded towns. The region is very special because it is home to the largest glacier in Europe known as Jostedalsbreen. This truly sensational natural setting, centuries-old history, and fascinating traditional Norwegian culture make it well worth checking out.

Pulpit Rock is a cliff that rises 604 meters above Lysefjorden. It is one of the top tourist attractions in the municipality of Strand in Rogaland country, Norway. It is also known as Prekestolen or Preikestolen. This majestic cliff was formed during the ice age, approximately 10,000 years ago. It is one of the highlights of the Norway tour. The Pulpit Rock tour is about eight kilometers long round-trip and takes about four hours. Even though it is reachable year-round, the season lasts from May to October and is considered the best season to hike through this scenic route.

Tromsø is a scenic Norwegian city that lies in Northern Norway. It is the largest urban area and the cultural hub of the region. The city is well known for its splendid beauty and a large number of wooden houses which dated back to the 18th century. The world’s northernmost cathedral, fine museums, brewery and botanical garden, stunning birch tree forest, polar museum, Storsteinen Mountain, and Fjellheisen cable car tour are some of the most notable things on the Tromsø tour. Other than that, Tromsø is one of the top destinations in the world for experiencing the spectacular Northern lights in the period September until April.And also the city is bathed in sunlight for more than two months from about the 18th of May to the 25th of July. So you can experience the midnight sun.

Bergen is located in the municipality in Vestland country on the western coast of Norway. The scenic city is known as the heart of the Fjords. Even though it is the second-largest city in Norway, it offers a charming look combination with metropolitan characteristics. The stunning city is the gateway to the fjords of Norway. Scenic hillside houses, narrow cobblestone lanes, and colorful old wooden buildings bring a unique appearance to this charming city. As a UNESCO world heritage site, the Bergen offers a great combination of nature, urban life, unique culture, and scenic beauty. Bryggen’s traditional shops and restaurants, old Bergen museum, Fjord cruises, Fløyen, Bergenhus fortress, and KODE art museum are some of the notable things on the Bergen tour.

Alesund is a part of the traditional district of Sunnmøre and municipality in Møre og Romsdal country in Norway. The municipality is set on seven islands and they are connected by bridges. It is considered the cultural center of the Sunnmøre region and is well known for Art Nouveau Architecture. It is a commercial center of the region and features one of the largest fishing harbors in Norway. During the Alesund tour, you can explore the Novang Valley, the Øye glaciers, Fjellstua viewpoint, historical harbor, rugged western coast, and midnight sun.

Trondheim is the third-largest city in Norway. It was the capital of Norway during the Viking Age and the religious center of the nation during the middle ages. The amazing city is a cultural center for music in Norway. Trondheim is Norway’s leading cycling city. So, you can experience an unforgettable cycle tour while strolling through the backlands, old town bridge, Bymarka, Ringve Museum, Folk museum, hiking trails, Krlstlansten Fortress, Rockhem, and Munkholmen. The city offers 11th-century Nidarosdomen Cathedral, which is a national sanctuary of Norway and the largest wooden palace in Scandinavia. A nearby world-class skiing area is an excellent place to have some adventurous fun.

Oslo is the capital as well as the most populous city of Norway. The Astonishing Norwegian capital sits at the head of Oslo fjord. It lies at a scenic spot and is surrounded by green hills and mountains. The 1000 years old city was part of the Viken during the Viking age. It is considered one of the most walkable capitals in the world. So you have excellent choices to pick your favorite route to walk.  Oslo offers two of the best art museums in Europe and makes it a must-visit site for art lovers. Fram Museum, Viking ship museum, Norsk folk museum, Vigeland Park, the Norwegian national opera and ballet Oslo fjord, and Frogner Park, are some of the top-rated attractions in Oslo.

Jothunheimen National Park lies in the middle of Norway. It boasts awe-inspiring landscapes and sceneries in the whole of Norway. Jothunheimen is home to giant mountain ranges, and countless scenic valleys, waterfalls, lakes, and glaciers scattered between them. Majestic Galdhopiggen stands with over 250 mountains of almost 2000 meters high. It is recognized as one of the premier spots to have great adventurous fun. National Park offers an excellent area for hiking in the summer and skiing in the spring and winter. Other than that, countless activities including biking, climbing, camping, and exploring wilderness are available for you. A traveler can experience the freedom, beauty of nature, and relaxing sound of waterfalls while sleeping inside the park’s wooden hut.

scenichunter - May 24, 2021 0
The northern cardinal (Cardinalis Cardinalis) is a beautiful mid-size songbird found in Southern Canada, throughout the eastern United States from Maine to Minnesota to...

The Cave of the Nymphs