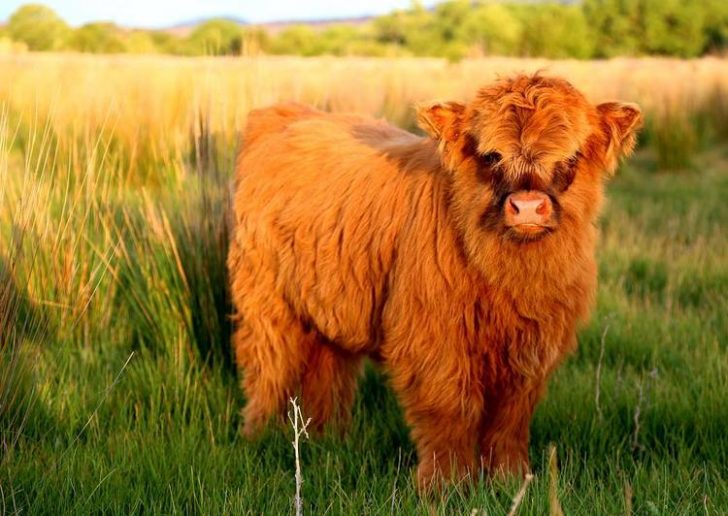 Highland cattle calves are among the world’s most beautiful, fluffy, and cuddly creatures, appealing to a wide range of people. This is a common way of praising domesticated pets and other fuzzy critters. Cows aren’t known for their fluffy appearance, with the exception of one breed.

Words like warm, fluffy, fuzzy, and wonderful come to mind when thinking of these cows. Highland Cattle are a breed of cattle that originated in the Scottish Highlands. This type of cow can be found in the Scottish Highlands. It’s simple to see why these creatures have such thick and lengthy fur when we consider the climate and atmosphere of Scotland. They’re made to resist the cold and dampness of these environments. In contrast to other cows around the world, nature has decreed that they should have long, woolly fur to blend in with their surroundings.

You may not believe that typical cows look attractive. But you may fall in love with the Highland Cows at your first sight. However, in this article also, the main focus is on the calves of these highland cows, not on typical cows. These calves are much sweeter, with their woolly appearance and humorous traits, just as infants of any species are beautiful and caring. Many people post images of these lovely calves on the internet, sparking concerns about their woolly nature from those who are unfamiliar with the species.

scenichunter - September 25, 2021 0
One of the most popular and well-observed trends in photography is travel photography. The most common people who do this are travellers, photographers, and...

08 Reasons to Solo Travel At Least Once