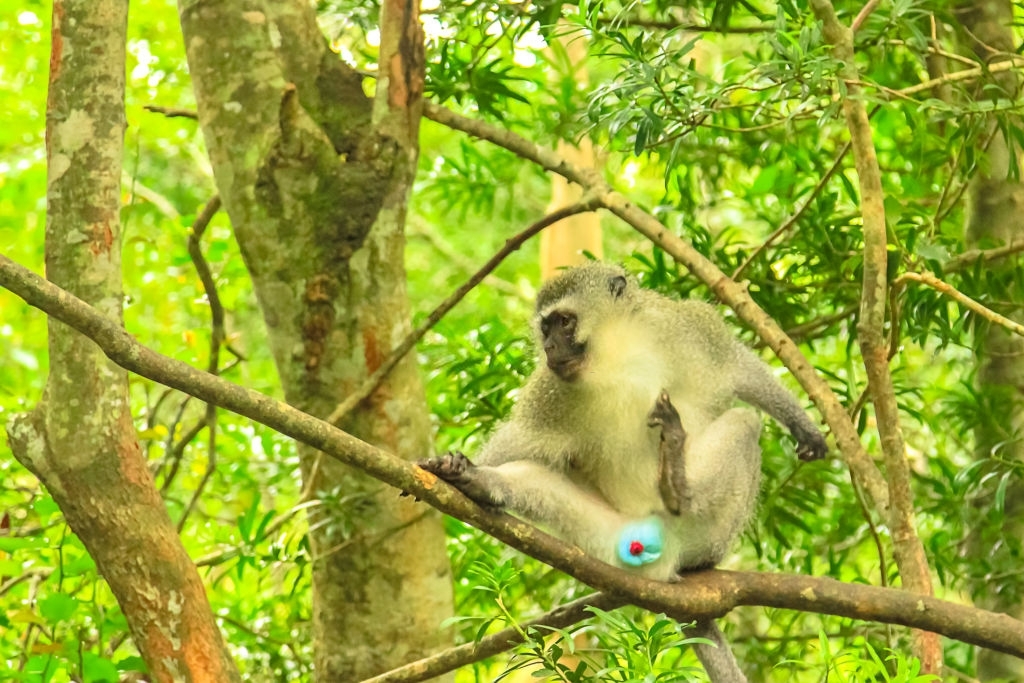 This special appearance is related to Vervet monkeys. Vervet monkey or Savanna monkey is an old world monkey of the family Cercopithecidae. Five distinct subspecies can be found throughout sub-Saharan Africa and deciduous forests as well as some of the Eastern countries.

These mostly herbivorous monkeys have beautiful and small faces and bright blue testicles. They have a black face with mostly grizzled-grey hair. The males are larger than females in weight and length and easily recognisable by a turquoise blue scrotum. An adult male weighs around 5/5kg and length between 17-24 inches and a females average weight is 4.1kg and the body measure between 11.8 to 19.5 inches. Normally they give birth to only one infant at once, during the period of September to February.

Why they have blue testicles?

According to the histology, velvet have dopa-positive melanocytes in the dermis, each packed with full mechanised melanosomes. The turquoise blue colour is due to Tyndall scattering over a layer of melanin. Their intense red and blue colour ass and genitals help them to attract females. Moreover, female monkeys prefer males with more vivid colours so the larger and colourful genitals are more captivating and attractive to females.

According to the historical evidence the velvet monkeys was inhabitants of this settlement around 2000 BC.

They have been noticed for having some social behaviours and human-like characteristics including anxiety, hypertension, social and dependent alcohol use. These special monkeys have four confirmed predators and the sighting of each predator elicits an acoustically distinct alarm call.  Vervets live in social groups, ranging from 10 to 70 individuals. Normally males move to another group at the time of sexual maturity. Females remain in their group throughout their life.