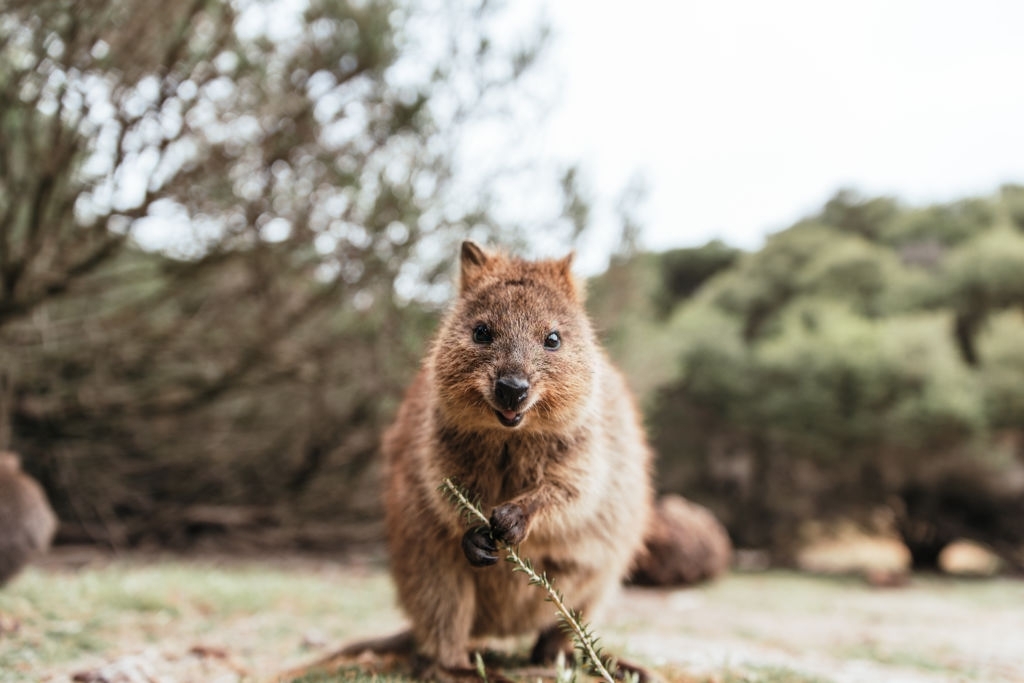 The name Quokka is a bit new to everyone, when people see even a picture, most people think of it as a created picture. Quokka is endemic to Australia and a significant number of Quokka live on the Australian island of Rottnest.

Quokka is similar to a cat in size, with a tail as long as a mouse, and a Kangaroo like pouch to carry small cubs. This cute animal contributed to the development of the tourism industry on Rottnest Island.

Quokka is a member of the Kangaroo and wolverine family and has a lifespan of about 10 years. They give birth to only one cube at once, twice a year. This small cube lives in its mother’s womb for about 6 months. Quokka is herbivorous like a kangaroo, and also a nocturnal animal. Their skin colour is dark brown and weighs around 2.5 – 4.5 kg for males and 1.5 – 3.5kg for females and the high is about 40 – 55cm.  Quokka scientifically known as Setonix Brachyurus.

According to the historical evidence, an indigenous tribe in Australia considered as the people, who gave this name to quokka. They first called it as “Gwaga” and over a long period the name had changed to Quokka. Quokka can climb trees and spend the whole day on trees and bushes, and also they are good at swimming.

According to the written history, Quokka was first mentioned in 1656. It was mentioned in the diary of Samuel Volckertzoon, a Dutch captain who explored the country at that time. About three years later, explorer William De Vlamingh mistakenly identified them as a species of giant rat, and named the island as ‘Rat Nest’. So that’s why the island is still known as “Rottnest”.

Can We Have a Quokka Pet?

There are more than Quokka animals inhabiting the island of Rottnest, and there are no restrictions on taking photos or close-ups with Quokka, but they are strictly prohibited from being kept as pets,  feeding them in parks and etc. Transporting, selling and buying Quokka animal in or out of the country is also a punishable offence under the regulations.

Why is Quokka Always Smiling?

The smile is the main reason that Quokka is differ from other animals. Actually, it is not a real smile it is an evolution tribe. Quokkas live in the hottest part of Australia, so Quokkas lower their high body temperature by opening their mouth widely and sniffing. That’s why they seem to smile so often.

If Quokka feels unsafe, the will not hesitate to bite anyone. Normally about a dozen of Quokka bites are reported each year. Now they are more familiar with people because tourists are part of their daily life.

Quakka is an endangered species. According to the data released by the IUCN, the population is estimated between 7500-10000. Climate changes badly affect on their lives.

Due to its cute appearance, tourists enjoy taking selfies with Quokka. So if you are traveling to Australia, don’t forget to check out this beautiful smiling Quokka.

scenichunter - August 28, 2021 1
Giethoorn is a Dutch tourist destination town located in the province of Overijssel, Netherlands. This charming village is very popular and, is referred to...

Meet the Most Terrifying Bird in the World: Shoebill