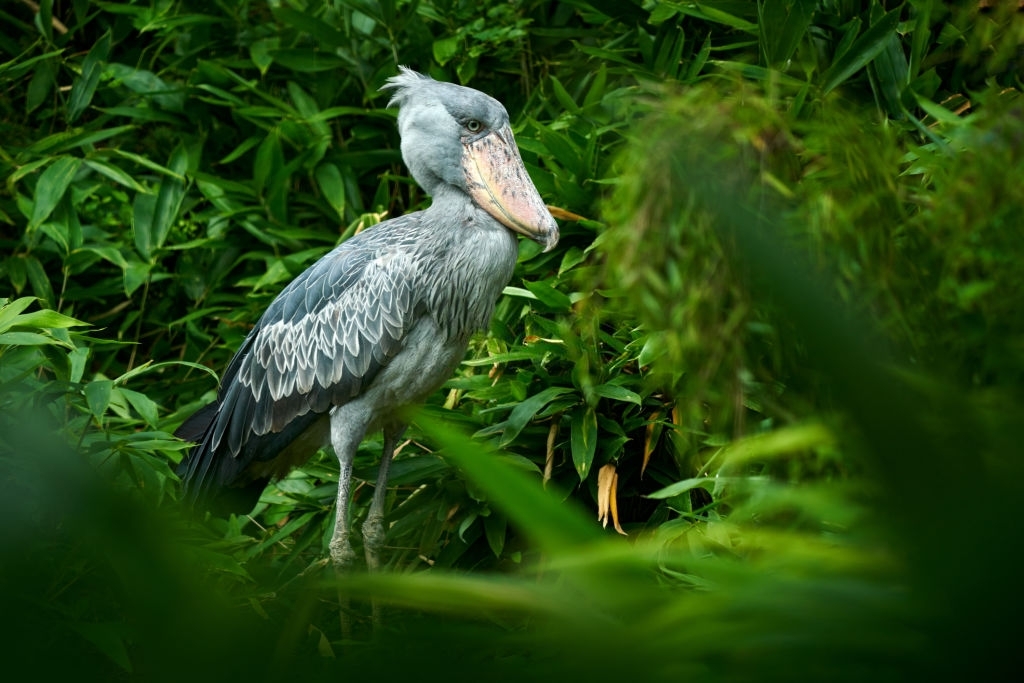 The shoebill is scientifically named Balaeniceps rex, commonly named whale-headed stork, shoebill stork, and whitehead. It got this name because of its enormous shoe-shaped bill. This amazing bird lives in large swamps of tropical east Africa from South Sudan to Zambia.

The shoebill was familiar to both ancient Arabs and Egyptians. But it was classified in the 19th century. The adult shoeill topically height of around 45 to  55 inches and a length range from 39 to 55 inches as well as a weight around 4 to 7kg. Its dark-colored legs are fairly long and breasts have some elongated feathers and the plumage of adult birds is blue-grey with some darker slaty-grey flight feathers. The baby shoebills have a silvery grey modesty-sized bill, but when they pass 43rd days from birth the bill becomes well developed.

It can be easily recognized by its unique features and these unique appearances give a terrifying look. The shoebills are usually found in areas of food plain interspersed with reed beds, and papyrus. They have very slow movements and stay still for long periods and they are largely piscivorous.

They create their nest on either solid mountain or floating vegetation and nestling starts right after the rains end. Normally lay one to three white eggs and their incubation period lasts for 30 days. The young bird can fly after 112 days and it takes three years for sexual maturity.

Normally shoebill birds are silent but they perform cow-like moo, high-pitched whines, and bill-clattering displays. The population is between 5000 to 8000 individuals. This amazing bird species is considered one of the most desirable birds in Africa by bird watchers.

scenichunter - June 24, 2021 0
If you truly love to travel all around the world, keep remember every country has its own set of values and traditions. So here...

The Rare Beauty Of The Sea Caught By An Australian Photographer.

Hike To The Rainbow Mountain