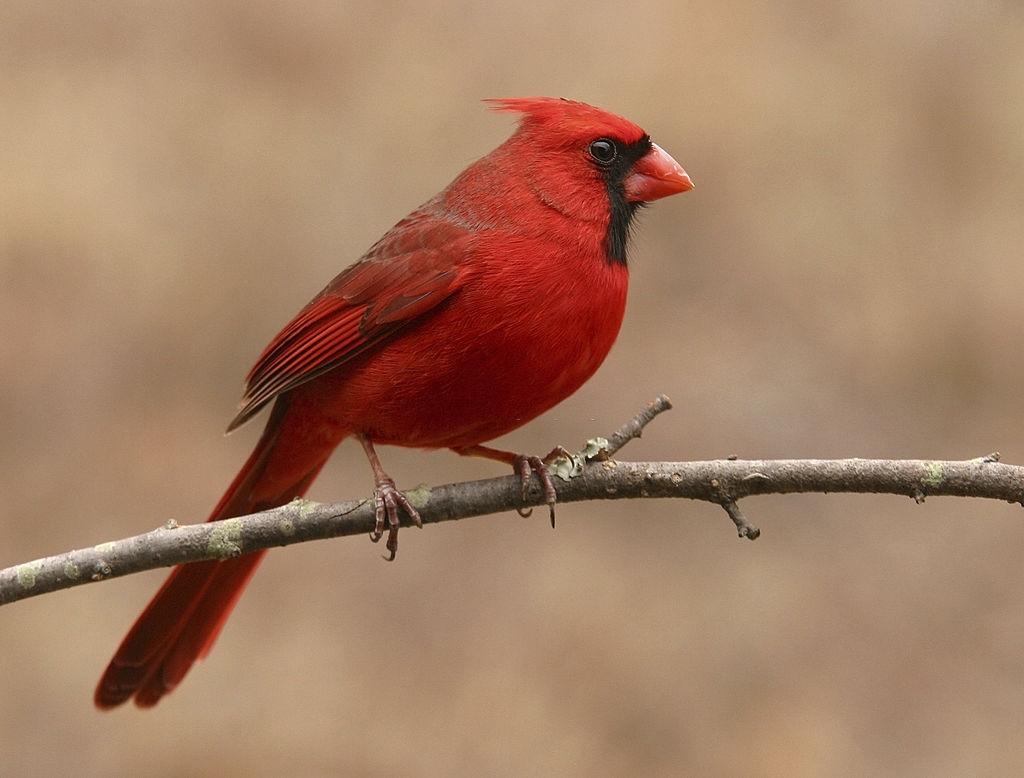 The northern cardinal (Cardinalis Cardinalis) is a beautiful mid-size songbird found in Southern Canada, throughout the eastern United States from Maine to Minnesota to Texas and South through Mexico, Belize and Guatemala. This beautiful bird also known as red bird, red cardinal, common Cardinal or just cardinal. Cardinals got their names because of their colour. This brilliant red colour reminded early explorers of the Scarlet robes of the Cardinals of the Roman Catholic Church.

Its habitat includes backyards, parks, woodlands, gardens, scrubby forest edges and wetlands. They are kind of active songbird and sing a variety of different melodies. They can found in throughout the year because it doesn’t migrate.

The Cardinal’s body length is 21 to 23.5cm, a wingspan of 25-31cm, and the adult weight around 44.8g. Normally, the male bird slightly larger than the females. The male bird has a brilliant red colour with a black face mask over its eyes and extending to the upper chest. The female is a reddish olive colour, more duller and darker on the back and wings than males. Hence, they are not migrating, both males and females will fluff up their down feather to protect body temperature and avoid cold air. Cardinals have a very loud and clear whistle form song pattern. According to the bird researchers, the oldest recorded cardinal lived 15 years and 9 months approximately.

The 99% of diet consist of seeds, grains and fruits, including sunflower seeds, wild grapes, oats, peanuts and fresh berries, but it also consumes some insects and snails. Male cardinals frequently attack other male birds and also, they are very aggressive when defending their territories, especially during mating season.

Most of the times pairs of male and female Cardinals mate for the successive year and usually do not stay far from each other but some also divorce between seasons or find a new mate when one dies.

Cardinals breed two to three times during summer. Normally, female Cardinals take responsible for building nest and males sometimes bring nest materials. They do not use their nest again and again. Eggs are white colour with a tint of blue, brown, or green and marked with gray, ground or lavender blotches. In each clutch, three to four eggs are laid. Most of the time females incubate the eggs and rarely male will incubate for a shorter time. Their incubation period ranges from 11 to 13 days and their chicks fledge 10th or 11th days after hatching. Because of the winter bird feeders and Cardinal’s ability to adopt suburban human habitats, the population of this magnificent birds are continuously increasing and the population is not at risk.