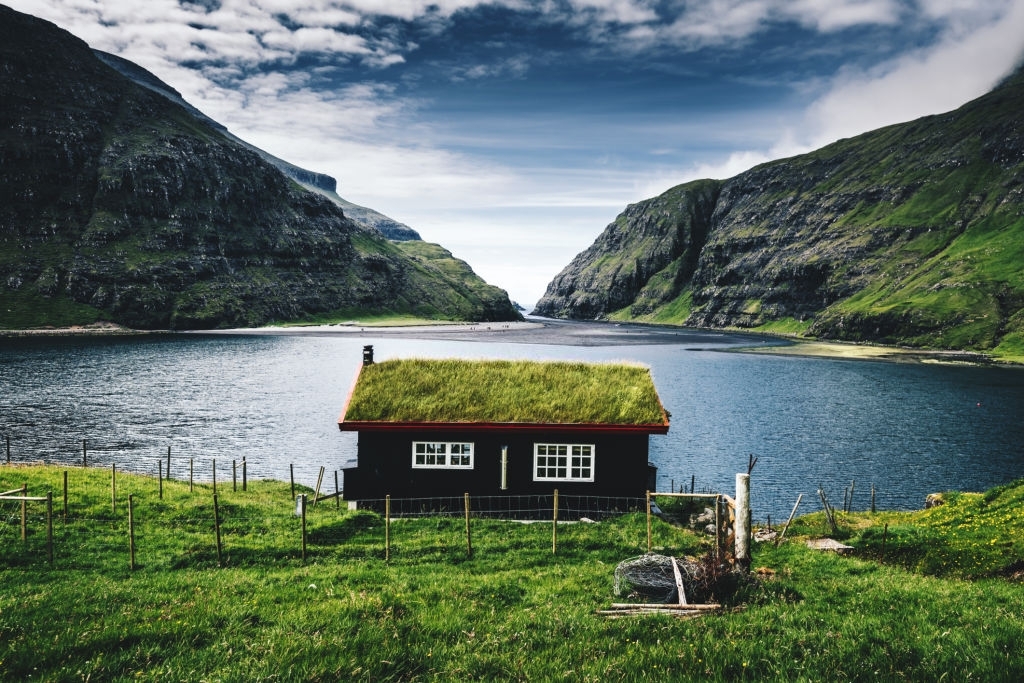 Faroe, located in the Gulf Stream of the North Atlantic Ocean between Norway and Iceland. Faroe has 18 small islands, that stretch up to 600-mile. Saksun is a small village near the northwest coast of Faroe island in the Kingdom of Denmark, with an unbelievable natural setting. It located above a beautiful lagoon and surrounded by high mountains. The inlet forms a deep and beautiful natural harbor until a storm blocked it with sand in the year 1600. This amazing natural harbor becomes an inaccessible lagoon, it is only accessible by small boats during high tide.

The picture-perfect scenarios and spectacular atmosphere in Saksun will calm everybody who visits the village. It is a perfect day trip from Torshavn, the capital of the Faroe Islands. In the year 1400, Saksun was first mentioned in old Faroe writings, the name Saksun refers to the settlement’s natural harbor, which derived from the old Norse language Sakshofn.

The village has a beautiful church and museum. The church was originally located in Tjornuvic, which was a long walk through high mountains. Therefore in 1858, it was disassembled and carried over the mountains, and reassembled in Saksun. And also the church got this new name Saksunar Kirkja (church of Saksun) on the 20th of June 1858. The museum was occupied a 17th-century farmhouse, which called Duvugardur.

Saksun is one of the most beautiful villages in the Danish archipelago. You can see large flocks of sheep, water sources, and mountains at every angle of Saksun.  Saksun considered as the source of the Stora River. The most notable feature of this beautiful village is the houses with thatched grass roofs.

Normally Saksun receives about 300 days of rain a year, therefore the residents have thatched roofs to protect them from the rain and heat. Since prehistoric times, the roofs of Scandinavian countries have been covered with birch bark and sod.

Thatched roofs were a common feature in rural areas until the early 18th century, and with the advent of tiles and other roofing materials in the 19th century, thatched roofs gradually became a rare seen.

The Eye of the Earth

scenichunter - June 21, 2022 0
The Cetina river spring also known as the eye of the Earth is a stunning karst spring located in Croatia. The splendid spring has...