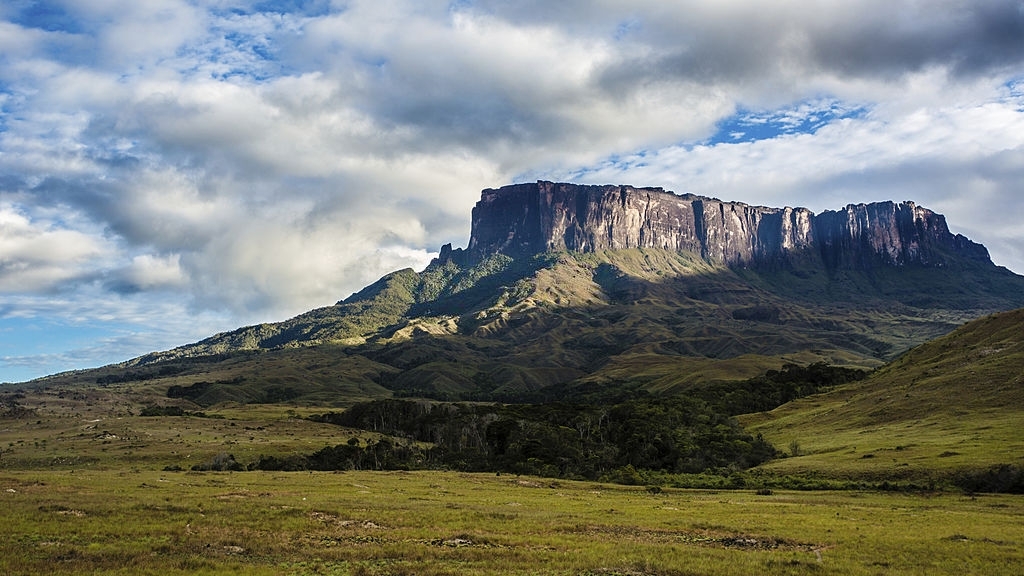 Mount Roraima is considered to be one of the oldest geological formations on Earth, dating back to about two billion years. It is an amazing flat table mountain surrounded by spectacular floating clouds and beautiful Savannah plains. This stunning giant mountain is the highest of the Pakaraima chain of tepuis in South America.

This name came from the Pemon people, who are native to this area. In Pemon language, “Rorai” means “blue-green” and the word “ma” means “great”. The native people call it “tepid” which means “home of god”. This giant mountain serves as the tripoint of Guyana, Venezuela, and Brazil, and accounts for 85% of the land area of Venezuela, 10% of Guyana and the remaining 5% of Brazil. It has a unique flora and fauna that has grown, completely isolated over the centuries. About 35% of the flora and fauna of mount Roraima can not be found anywhere else on earth.

The height is 2810 meters and the top of the hill is about 31 square kilometres. Therefore this is considered a plateau. The mount has been created at the meeting point of the three centuries. This flat mountain looks like a large island floating in the sky when viewed from the plain of Gran Sabana. Mount Roraima looks mysterious because it is always foggy, and has been the centre of indigenous myths and legends throughout centuries.

According to the beliefs of the indigenous Paymon and Capone tribes of Gran Sabana, the place had a powerful tree that holds all the fruit and vegetables of the world. A mythical magician named Makunaima cut it down and released a huge flood. The flat Roraima mountain is what remains of this tree after it was cut down.

Mount Roraima has several waterfalls, commonly known as Roraima falls. This creates waterfalls as it rains daily. Roraima is located at the southeast corner of Canaima National Park, Venezuela. The journey to climb Roraima is starting from the Santa Elena, area of Venezuela and it takes about 3 days to climb up and a total of 6 days to up and down. This strange rock formation inspires, travellers, writers, hikers, explorers and movie makers around the world. So, undoubtedly, Roraima is truly a lost world.

Waterfalls In Brazil – Read When Planning Your Next Trip To...