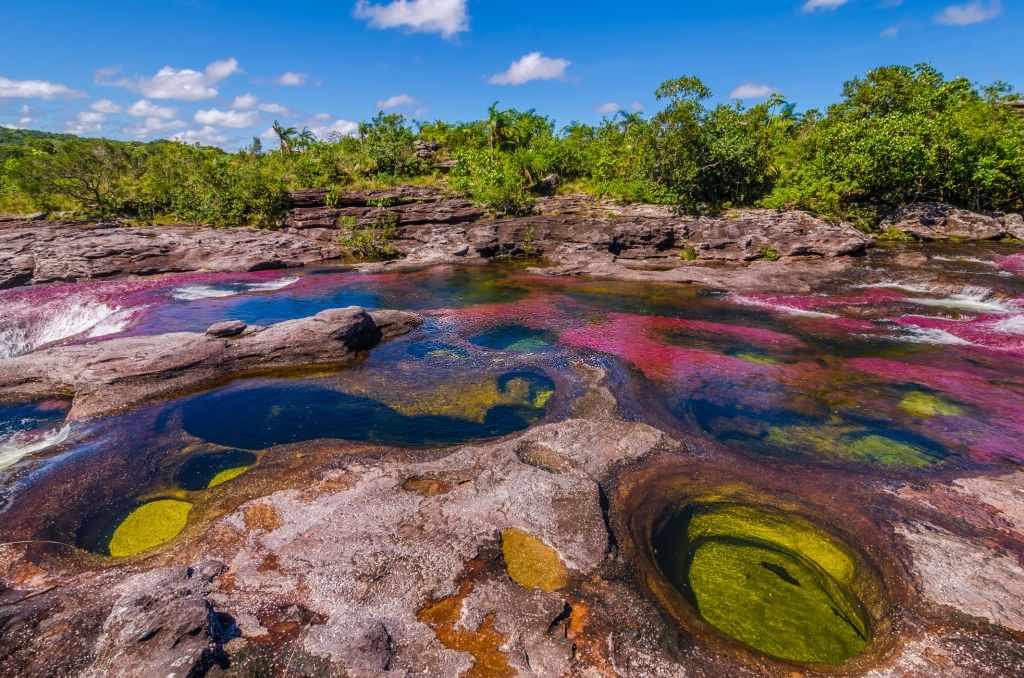 We usually see blue or light green rivers with clear water. But in Colombia, we can see a river which appears in 5 beautiful colors. This is a cool design of yellow, red, green, blue, and black. This amazing refers is named Cano Cristales and is located in the province of Serrania De la Macarena, Colombia. It is also famous as “the river of five colors”, Liquid Rainbow, and the river flows into paradise and is noted for its striking colors and unbelievable beauty.

Each part of the river is displayed in a variety of colors telling the world about the uniqueness of nature. The Serrania de la Macarena is bordered by three large ecosystems, including the Amazon rainforest, the Andes, and the Eastern Llanos. All of them are highly diversified with flora and fauna.

The tableland’s location consists of quartzite rocks formed 1.2 billion years ago. This area is densely forested. So the river is he to 420 species of birds, 10 species of amphibians, 43 species of reptiles, and 8 species of apes. The river is also home to a wide variety of micro-organisms as well as a large and moss species, plant species, and a variety of rock formations.

It is also one of the fascinating destinations on the map of the tourist of the world. The most prominent color of this river is pinkish-red. This color is caused by a species of plant native to the area called Macarenia clavígera. Another thing to remember is that the water of this river is very clean. If you like to see how fascinating this river is. There are no roads near this river and you have to go on foot or horseback.

scenichunter - July 27, 2022 0
The cherry blossom festival is one of the national symbols of Japan, it is also known as Hanami in the Japanese language and famous...