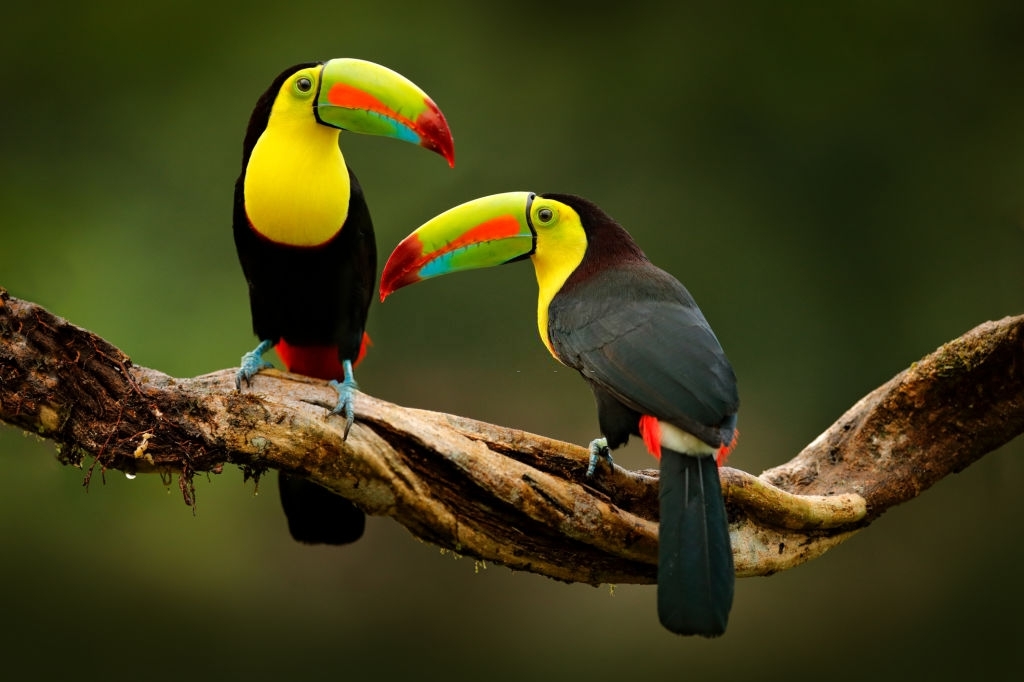 Blue jays are considered as one of the charming and most intelligent birds in the world. They can be found across forests of Central and Eastern North America but in winter, migrate to the South. The blue jays have a stunning blue color with, white and black plumage. Measures of blue jays; 22-30cm from their bill to tail and their weights in between 70-100g. The most distinguishing feature of this songbird is its noisy ‘jay jay’ like calls but they can also imitate the call of other species of birds. Male and females are similar in size and color. Blue Jay can be very aggressive to other birds: they sometimes rain nests, steal nestlings, decapitated and steal eggs of other birds.

Resplendent Quetzal is related to the trogon family and it’s native to Chiapas, Mexico to Western Panama. They are well known for their beautiful plumage. There are two species of trigon and the largest is 36-40cm long, the tail streamers of male measures around 75cm and weigh about 210g. They have beautiful green bodies and red breasts. The male bird has a helmet-like crest. They have large eyes, that can easily adapt to the dim light of their forest home. Their noise is a treble syllable. It can explain as kyow or a whimpering pup, that may be repeated monotonously. They also have other unmusical calls as well. The Resplendent Quetzal is considered as near threatened on the IUCN red list due to habitat loss. This gorgeous bird is considered the symbol of the divine, spring, goodness, light, freedom, and wealth.

Keel-Billed Toucan is a bird with a beautiful bill. Obviously like other Toucans, this one has a large beak, but it is different from others since it is rainbow color. This beautiful huge multi-colored bill grows up to 20cm in length. Because of the beak, also known as Rainbow billed toucan. This beautiful beak is a mixture of red, yellow and green color, that help them to attract females during the breeding season and also work as a defensive weapon. Keel-Billed Toucans belong to forest across central and south America. They are 20cm long and weigh around 4kg. They are very social birds and live as small flocks, that contains below 30 birds.  Keel-Billed Toucan have heavy wings therefore they are not good flyers.

Hyacinth Macaw is the largest of all flying species of parrots in the world and the most beautiful parrot as well. Did you recognise this beautiful blue colour bird? As you saw in the movie Rio, the Hyacinth macaw has a deep blue tone, a striking yellow ring around its eyes with an impressive length of 3.3 feet. They belong to semi-open areas and Savana grasslands of northern Brazil. Because of habitat loss and hunting their population is declining. Therefore, less than 5000 macaws left in the world. These wonderful macaws have a beautiful long tail and a strong and curved black bill. Hyacinth Macaws are very playful and could be an excellent pet with proper training. Their noise is extremely loud when compared to other macaws.

Mandarin duck is probably the most stunning colorful waterfowl in the world. Mandarin duck is native to the east pale arctic and closely related to the North American wood duck. The adult male mandarin duck has a large white crescent above the eye, reddish face, whiskers and red bill. Their breast is purple in color with two vertical white bars and two orange sails at the back. The female Mandarin ducks are not so colorful as the male but they are beautiful with white eye-rings and stripe running back from the eye. Male birds uses their stunning plumage to attract female birds during the mating season.

Peacock is the male bird of peafowl. This gorgeous bird may be the icon of beauty in the bird kingdom. There are three types of peafowls in the world including Indian, Congo and green peafowls. An adult male peafowl grows up to 5 feet in length. More than 60% of its total length accounting it’s long tail. They look magnificent with their extravagant blue and green plumage and colorful tail feather. Peacocks are considered as one of the largest flying birds in the world. Their noise is so loud and it usually occurs just before, after or during copulation. Female a is a little smaller than males and different in color.

It is no mistake flamingo is the most recognisable wading bird in the world. It has always been the symbol of beauty and elegance as well. The stunning red coloured plumage and high make it so special among other birds. This beautiful bird can found in every continent of the world except Antarctica. They are very tall creatures with an average of 4-5 feet and about 3.6kg in weight. Their legs are very long about 30-50 inches and their neck is long as well. The long legs help to catch small fishes, planktons and larvae from the mud. This stunning bird lives in large colonies, that colony include thousand of members.

Victoria Crown Pigeon is a bluish-grey colour large pigeon with maroon breast, red irises and elegant blue lace crests. This beautiful large bird is native to the New Guinea region. It can easily be recognised by its stunning colour, elegant crest with white tips and by its deep whooping sounds. This species typically grows up to 70-75cm long and weighs around 3.5kg.  Their population is distributed in the swamp forest and lowland of northern New Guinea and surrounding island. Both males and females look similar in colour and size.   Victoria Crown Pigeon is marginally larger than the other two types of crowned pigeons, so it considered as the largest pigeon on earth.

Golden Pheasant is also known as the rainbow pheasant and Chinese pheasant. They are native to the forestry mountains of Western and Central China. The feral population have been established in many other countries in the world. The length of an adult male is 90-105cm and its tail accounting two-thirds of the total length. They are remarkable with their golden crest and bright red body. Golden yellowish features looks like gold plated. Their beautiful feathers range in a rainbow of colours. The upper back is green, the rest of the back is golden yellow, tertiaries are blue whereas the scapulars are dark red. The females are much less showy, with a dull brown plumage and small in size.

A list of the most beautiful birds in the world never be perfect without a beautiful scarlet macaw. They are native to humid evergreen forests across Central and South America. They are very famous because of their bright red plumage, blue back, yellow upper wings and green color edges. A scarlet macaw grows up to 80-90cm in length and weighs around 1.5kg. This beautiful macaw has a long lifespan of 40-50 years and scarlet macaw’s captivity can live up to 75 years. They are great fliers and the speed is around 35mp/h. This stunning bird is one of the most intelligent bird in the world. Scarlet Macaws are very loud and they can imitate different types of noises. This amazing bird has became a symbol of everything exotic, gorgeous, colorful and perfection.

A Journey to Finland – The Secret Behind the World’s Happiest...