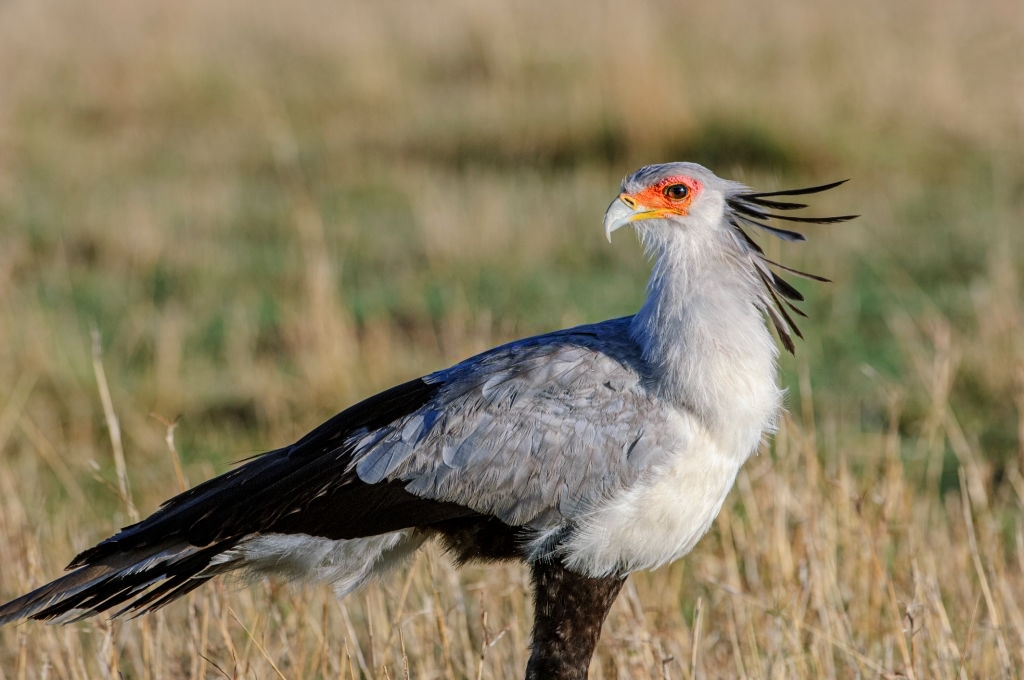 The secretary bird (Sagittarius Serpentarius) is a very large bird, endemic to Africa. They are usually found in the savanna of the sub-Saharan region. Secretary birds are quickly recognizable, with their eagle-like body, and crane-like legs. These legs give 1.3 m height to them.

The Secretary bird is considered as a native bird to Sub-Saharan Africa, and its range extends from Senegal to Somalia and South to Cape Province South Africa. During the Dutch period, Dutch settlers in Africa called the bird, “Sagittarius” but the local farmers pronounced it as “Secretarius”. Eventually, the letter stuck and the name morphed as a secretary.

The Secretary bird prefers open grasslands, Savannahs and shrub lands rather than forests, desert and dense shrubbery. Specifically, this bird chooses areas with grass under 0.5m high and avoid areas over 1m high.

Normally, weight ranges from 3.74 to 4.27kg, average height is 1.3m, length between 112 to 150cm, and also it has 10 to 15 years long life span. The upper part of the crown is blue-grey and the under part is grey-white. The Secretary bird has more luxurious lashes. When it becomes an adult face changes to red-orange colour with brown irises and a yellow card. This beautiful bird is very speedy, move quickly and taking 120 steps per minute. They may spend their whole day on the ground but they are good fliers. Normally, they cover around 32km in a day of hunting.

These beautiful birds defend a large territory which around 50 square km. They form monogamous pairs and can breed at any time of the years, but more frequently in the late dry season. The best is built between 2.5m to 13m above the ground by both male and female. They usually have 1 to 3 eggs at once and both parents incubate the eggs, but female remains on the nest over night. The new-borns are grey-white in colour and gradually become darker. Their crest feathers grow at the 21st day, fully feathered at the 60th day and leave the nest between 75 to 80 days of its age.

They usually hunt their foods, and normally have insects, mammals ranging from mice to hares, eggs, snakes, crabs and, etc. In 2016 Secretary bird listed as a vulnerable species and endangered in 2020 because of the rapid decline. They are currently threatened by habitat loss but lots of conservation efforts are proceeding to slow down the decline in population.

5 Rare Animals You’ll Find Only in One Specific Place